That’s right, I’m back! 🙂 Making up for my bad blogger moments with my second blog posting in a week. Are you shocked? Don’t look outside to see if the sky is falling, just sit back and enjoy the unexpected. You never know if it will happen again. 😉

So, I went back to Mother Load Boulevard, and as I was walking there yesterday, I took a few images to share with my huge audience.

Laughing, really? All right, I’ll wait until you’re done. Get it out of your system now. *foot taps impatiently*

Okay. Well, my second trip was nearly as entertaining as my first. Not everything was the same as my first trip, I guess that was to be expected, but the setting still held a ton of creative ticklers.

Like this first house. What’s the big deal you ask. Just looks like a regular house to you? Zoom in on the window. That’s okay, I’ll wait. *Hum, hum, hum*

See it now? That creepy jack-o-lantern smile carved into the screen is not present on just that window, it’s on all of the windows that can be seen from the street. WTF, right? Well, if you could see the whole house, you’d realize that no one has lived in it for what looks like quite a while. Another foreclosure resulting from the Great Recession I’d imagine, but that’s not what got my imagination stirring. No. It was the creepy smile. Now, I’m not normally a horror writer, but I started picturing all kinds of creatures floating around inside there, and then I began to imagine the kind of magic that could keep a property empty when it’s so clearly on a large, valuable lot. The kind of magic that makes for a great story. And that’s just the first house on the street. :-O

Next up was this ranch. Just doors down from the other house, this ranch sits on a ton of property. If you zoom in on the gate, you’ll see that they’ve named their property, and it’s most likely the a beautiful family home. But…*cue maniacal laughter here* I didn’t picture a cozy family riding horses and sharing tea on the back patio. I envisioned a Dallas-type family, replete with evil schemes, sexy women falling into bed with every man that gives them a flex of their abs, and hot cars. A bit of a difference from the first house, huh? Just wait. 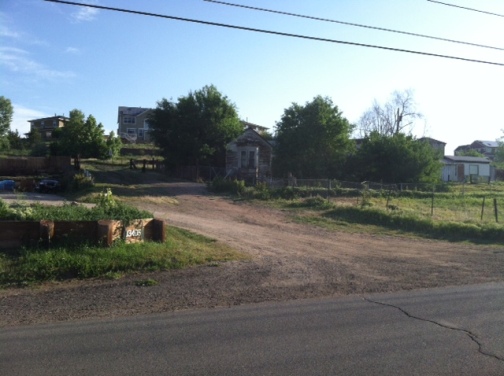 Back across the street and right next door to the first house, we have this little gem. Keep you’re eyes on the foreground, rather than the big, box houses in the back please. Those are not nearly as interesting.

The house hiding in the bushes, the one with the red paint sneaking out from a very old coat of white paint, looks like it was a one, maybe two room bungalow when it was first built. Simple, honest, no frills. But, do you see the small white structures on the right side of the frame? Those are attached to it. Not in a professional, “let’s spend a wad of cash cause we’re moving on up way”, they’re attached in pieces. Chunks, really. It brings to mind the ramshackle homes you see in documentaries of the slums of India or of squatters villages in Asia or Africa. Sad. Depressing buildings that are held together by scraps of wood and metal.

And I began to imagine the people who lived there at some point because this house also looked abandoned. I imagined their hard lives and the tenacity that type of life breeds.Can you picture the people who might have lived there? Who do you see? I smell a book of generations. What about you?

Next, I bring you the millennium’s version of hippies. A lot has changed. 🙂 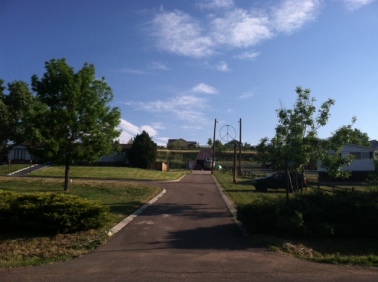 That is the biggest peace sign I’ve ever seen. What was even funnier about this house was the fact that as I walked away, I actually saw an old school bus in the back yard. I tried to take a picture, but there were too many trees. It was hilarious because this is one of the nicest houses on the street and it had a relatively new high-end SUV parked on the side of the house. A lot has changed hasn’t it?

The story I saw in this house had more to do with the golf cart of their neighbor’s house. Across the street and two doors down was a golf cart with not one, but two rifle cases mounted on back. It was sitting in front of a cute, little ranch with flower pots and a cozy front porch. I imagine each neighbor would have something to say about the other ones’ choices in life. What would a conversation between them sound like? And how would they perceive that conversation? Oh, my mind was roiling.

And for the finale: a big, blue box. (For you Dr. Who fans out there, it’s not that kind of box. *Darn, I need a smirk emoticon.*)

Seriously. (Ha ha ha – sorry, it still cracks me up)

This sits across from a high-end house on the corner; the house that is for sale. Can you hear the conversations the real estate agents must have with their buyers? Oh, I can.

But it all goes back to setting, my friends. As time moves forward, so much changes, but as change takes place, pieces of lives are left out for us to gather. Those pieces can be found on a suburban street or on a far-away planet, but they’re there, and it’s our job to gather them. So, pull on your walking shoes, wand, or jet pack — whatever your mode of transport – and go take a look around. There are streets just waiting for you, but stay away from mine. 🙂